Is mowing the lawn destined to become a thing of the past? (Photography by Colin Thackery, CC-image from Geograph)

I was recently dismayed to see a van delivering an artificial, or ‘lazy’, lawn to a residential property near my home. The idea that living lawns are being replaced with sterile carpets of plastic grass troubled me and, while I had hoped this was a relatively uncommon occurrence, further investigation revealed the popularity of lazy lawns is rising rapidly. Some companies claim to have increased business by 40-50% every year since 2010 and the eponymous LazyLawn has seen annual increases of 25% and sold enough artificial grass in the last year alone to cover over 10,000 gardens, some half a million square meters. Trends in Google searches appear to confirm that artificial lawns have indeed been increasing in popularity over the last few years, and not just in the UK. This represents a worrying trend when you consider that domestic gardens in the UK alone are estimated to cover more than 430,000 hectares1 and therefore offer a potentially invaluable resource for conserving biodiversity, helping to prevent flooding and reduce overheating in urban areas. Even though well-maintained, natural lawns aren’t necessarily the most wild-life friendly of garden habitats, they do provide a home for worms, ants and other soil invertebrates and food for the birds, mammals and amphibians that prey on them. In stark contrast, many artificial grass manufacturers proudly announce that their lawns eliminate the food sources (i.e. worms and insects) that attract garden ‘pests’ such as foxes and moles. Unsurprisingly, they typically omit to mention that the same will inevitably be true for the blackbirds, song thrushes, green woodpeckers, hedgehogs, badgers and any other species that feed on lawn invertebrates. 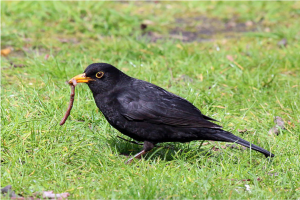 Artificial lawns offer freedom from the burden of worms and blackbirds. (Photography by Charles Sharp, CC-image from Wikimedia Commons)

In addition to ridding your garden of nuisance critters, the lure of a maintenance and mud-free lawn that looks perfect all year, along with improvements in the realism and texture of fake grass are believed to have led to the increase in demand. As it doesn’t require watering to maintain its appearance, artificial grass is also unaffected by hosepipe bans and other water restrictions. A potentially important consideration when climate change projections for the UK suggest summers will become longer and drier, with increasing droughts in southern England2. Indeed, saving water is just one of several benefits to the environment that artificial grass manufacturers are keen to point out. In addition to water, artificial lawns also do away with fertilisers, pesticides and the CO2 emissions and energy requirements associated with mowing grass lawns. But while this may be true, the same could also be said about a garden covered in concrete!

Interestingly, even concrete may be preferable to laying artificial turf as it reflects more incoming sunlight, 17-27% compared to 10%3, and several studies4,5 agree that artificial turf contributes more to urban overheating by generating higher local surface temperatures than concrete. In fact, the only environmental benefit artificial grass really offers over concrete is that it provides better drainage, and may reduce the impact of heavy or continuous rainfall by releasing water more slowly than harder, flatter surfaces6.

Artificial grass is an oil-based product that reduces biodiversity without providing any of the ecosystem services that real grass does (e.g. producing oxygen, regulating surface temperature or sequestering carbon). The fact that its suppliers are marketing it on environmental benefits reeks of greenwash. While claims about water savings etc are true, it’s only half of the story and little, if any, mention is made of the environmental downsides. For example, a list of disadvantages on www.artificialgrassnet.co.uk actually lists 17 advantages (including “eco-friendly”) of artificial lawns but only mentions one disadvantage, that it’s more expensive than real turf. Another example of this kind of misrepresentation can be found on the website of www.artificialgrass-direct.com where the following quote from Tim Rumball, Amateur Gardening magazine’s editor, appears:

“Artificial grass these days looks great. You cut it to shape, put it down and you have an instant lawn that you could display at Chelsea and it needs no maintaining.”

However, in the same interview, not included on their website, he adds:

“When grass grows longer it attracts insects. If you have an artificial lawn then these insects will be depleted and the whole of the food chain will be affected especially birds that rely on insects for their diet.”

The unfortunate irony is that many councils, businesses and conservation groups have been trying to increase biodiversity and, reduce urban heating and runoff by encouraging the use of green roofs, which replace man-made surfaces with natural grass7. Tragically, it appears a growing number of private residences have been doing the exact opposite by letting lazy lawns into their back yard.

Currently a PhD student with the NERC Doctoral Training Partnership, studying soundscape ecology at Royal Holloway. Previously, I studied an MSc in Environmental Monitoring, Modelling and Management at King's College London and a BSc with the Open University. I'm interested in a wide range of topics, particularly the application and adaptation of new and existing technologies to examine various aspects of the environment.